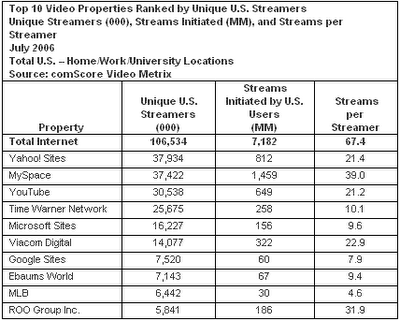 Video Metrix is the first and only service to track actual online streaming video behavior among U.S. Internet users, offering publishers and advertisers valuable insights into the emerging Internet video universe. According to the latest press release, Flash video content is now part of the monthly rankings for streaming video sites and as a result - Yahoo sites attract the most U.S. streamers while MySpace leads in number of streams among U.S. internet users.

comScore Video Metrix measures online video content served through all major media players, including: Flash, RealPlayer, Windows Media, QuickTime and DivX. (The service, which is based on streaming activity among U.S. Internet users, does not include measurement of digital rights management (DRM) content online, videos viewed through peer-to-peer (P2P) applications, or offline viewing of video content.)
Posted by Todd Beals at 7:13 AM No comments:

The Future of the Internet - PART II

The Pew Internet Project announces the release of its second report on The Future of the Internet. (For the full report, please click HERE.) The report is built around respondents' responses to scenarios stretching to the year 2020 and hundreds of their written elaborations that address such things as the kinds of new social interactions that will occur when more "meetings" take place on screens; the changes that will occur in nation-states; the evolution of autonomous technology; and the proper ways to police the internet. According to the press release, a survey of internet leaders, activists, and analysts shows that a majority agree with predictions that by 2020:

o A low-cost global network will be thriving and creating new opportunities in a "flattening" world.

o Humans will remain in charge of technology, even as more activity is automated and "smart agents" proliferate. However, a significant 42% of survey respondents were pessimistic about humans' ability to control the technology in the future. This significant majority agreed that dangers and dependencies will grow beyond our ability to stay in charge of technology. This was one of the major surprises in the survey.

o Tech "refuseniks" will emerge as a cultural group characterized by their choice to live off the network. Some will do this as a benign way to limit information overload, while others will commit acts of violence and terror against technology-inspired change.

o People will wittingly and unwittingly disclose more about themselves, gaining some benefits in the process even as they lose some privacy.

o English will be a universal language of global communications, but other languages will not be displaced. Indeed, many felt other languages such as Mandarin, would grow in prominence.
Posted by Todd Beals at 7:49 PM No comments:

Beyond The Soundbytes - The MusicTank Report

Since its inception in 2003, MusicTank has earned its title as the UK music business network- a collaborative community that overrides traditional industry partitions in all genres. The network also hosts regular think tanks which bring hot topics into sharp focus and help pinpoint the opportunities created by disruptive technologies.

"In composing this first ever review of MusicTank activity, Peter Jenner has summed up of-the-moment Think Tank debates, from DRM usage to the emerging possibilities of future radio, and has also taken this opportunity to look beneath the immediate issues to unearth the fundamental and seismic changes which new technology and new consumer attitudes continue to affect within all areas of the business. "

The main findings of the report, in terms of where the industry is now, where it should be, and how it can get there, are summed up in the freely available Executive Summary available HERE.
Posted by Todd Beals at 6:19 AM No comments:

Thanks to our friends over at the Wired Blog called the Listening Post, cracking Apples Fairplay DRM for the new iTunes 7 is pretty simple using version 2.3 of the application called QTFairUse6 created by the clever hackers inhabiting the pages of www.Hymn-Project.org. (The only drawback is that it removes the usability restrictions one song at a time and leaves you with a naked file in the AAC format - which doesn't work on every portable music player yet...)

PRESS RELEASE: Last week The Center for Democracy & Technology (CDT) released a document designed to help promote a greater public understanding of the choices and tradeoffs associated with products and services that include Digital Rights Management (DRM) technology.

An electronic PDF copy of the paper is available at:
http://www.cdt.org/copyright/20060907drm.pdf

A handy reference sheet is available at:
http://www.cdt.org/copyright/20060907drm-metrics.php.

"The rapid emergence of DRM technology has sparked a serious policy debate between copyright owners, who say the technology is essential to protecting their works, and critics who warn that many DRM technologies threaten to undermine consumers' rights to use digital media. But as that debate rages, DRM products continue to enter the marketplace, leaving consumers to decide what tradeoffs they're willing to make when buying electronic media.

The paper tackles the complicated subject of copyright protection technology, offering a clear set of metrics for consumers and product reviewers to consider when evaluating DRM-protected devices and services. The goal of the paper is to educate users about what questions to ask to determine how various DRM applications may affect their ability to use movies, music, games and other media."
Posted by Todd Beals at 6:54 PM No comments:

Obstacles to Educational Uses of Copyrighted Material in the Digital Age - Click HERE to read the White Paper online, which reports on a year-long study by the Berkman Center for Internet and Society, funded by a grant from the Andrew W. Mellon Foundation. The study explores whether innovative educational uses of digital technology – everything from DVDs in the classroom to digital music libraries to online resources such as Wikipedia -- are hampered by copyright restrictions.

The foundational paper examines the relationship between copyright law and education. In particular, exploring whether innovative educational uses of digital technology are hampered by the restrictions of copyright. They found that provisions of copyright law concerning the educational use of copyrighted material, as well as the business and institutional structures shaped by that law, are among the most important obstacles to realizing the potential of digital technology in education. The paper builds on four detailed case studies of initiatives that have encountered such obstacles. Each of these initiatives is moving forward, but only by fighting against a copyright-related system that instead should be helping educators accomplish their goals...

While the primary task of the paper was to identify these obstacles, the paper concludes with some discussion of paths toward reform that might improve the situation. It suggests that certain types of legal reform, technological improvements in the rights clearance process, educator agreement on best practices, and increased use of open access distribution would help overcome the obstacles identified.It's available in HTML and PDF. You can also listen to an interview with McGeveran about the paper at AudioBerkman.
Posted by Todd Beals at 6:37 AM No comments:

Todd Beals
I'm a classically trained musician (with an insatiable appetite for discovering new Jazz & Reggae music) who has been actively performing since 1986. I hold music, audio and business degrees and work internationally as an executive with a diverse background in audio/video production, consumer electronics and telecommunications. Drawing on my real world education and experience, I consistently follow the evolution and intersections of entertainment, social media and technology. I'm passionate about teaching and helping others and enjoy sharing my knowledge and experiences as a guest speaker and panelist. Currently, I'm in charge of Strategic Business Development-M2M, focusing on Global Alliances for Rogers Communications. I also play trumpet/flugelhorn in The Tides Band based out of Indianapolis, IN. (The views expressed on this website/blog are mine alone and do not necessarily reflect the views of my employer.)