"One overpowering trait distinguishes exceptional people from the masses who live and die without making their mark in the world . . . without accomplishing significant achievements. That trait is the drive to learn, to grow, to identify new and more effective ways of engaging in their personal and business endeavors. Those who are determined to escape the bounds of gravity will find that God has created a profound blueprint for success."
-  Mark Stevens: God Is A Salesman
Posted by Todd Beals at 9:57 AM No comments:

Feeding Off of Twitter's Exponential Growth

Some Mind-Numbing Stats from COMPETE:

Quote of the Day


"Make everything as simple as possible, but not simpler"
- Albert Einstein
Posted by Todd Beals at 11:37 AM 1 comment: 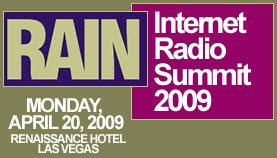 After 2 weeks of playing catch up and another reminder of why I don't like to be away from the office for an extended period of time, I finally scratched off a few "To-Do's" on my list and sat down to reflect on my recent travels as several friends and colleagues have asked me for a recap...So, below is a quick summary of my trip to the NAB Show in Las Vegas on the way back from Seattle two weeks ago. My main focus was to attend the RAIN Internet Radio Summit as a guest panelist, but I also made time to walk the show floor for a half day and had a few ad hoc meetings...so needless to say it was a super busy - but VERY productive week!

From my perspective, there appeared to be a lot of buzz overall and lots of new enthusiasm and optimism about the Internet Radio category in general, especially with the latest numbers just released (i.e. 42M U.S. listeners = 17% of the population, up from 33M in 2008). Speaking of research, there were 3 very excellent presentations given by Edison, Ando Media and Jacobs Media (btw - The Infinite Dial PDF slides can be downloaded for free HERE). The latest research clearly shows strong growth and consumer interest with 69M Americans reportedly listening to Internet Radio as of last month (mostly on PC's and at work), but the reality is that even taking into account the poor economy, there just have NOT been any home runs yet on the device side and very few retail placements.

At the end of my DEVICES panel, I asked the audience why mass consumers aren't out buying more tabletop or desktop Internet Radios if awareness and usage is so high and the 2 answers I remember being belted out were: "prices are still too high" and that "they're too complex to set up and use." I would agree with both of those answers as potential barriers to adoption and growth, but another reason might be that the 'early adopters' are simply using their iPhones and Blackberrys with unlimited data plans to simply stream it for free. However, that's just a subset of the overall population and I firmly believe that many people still prefer a dedicated device when listening to music at home...and that there's a huge under served market for average consumers who don't have a data plan and just want to use their free Wi-Fi connection at home or at work...(Time will tell if 2009 is the year Internet Radio truly grows legs, but I'm obviously biased as part of the Product Development team for Acoustic Research's Infinite Radio.) From my perspective, the Summit sponsors and audience seemed to be predominantly Radio-centric, (which was no surprise since it was an NAB event) but there was no denying a huge presence from the advertising side of the house....(a necessary evil that no one can deny because someone has to make a profit in order to help finance thousands of free broadcasts and effectively subsidize the ridiculous royalty rates...)

The event organizer, Kurt Hanson, seems to be one the industry's biggest evangelists lobbying for the proliferation and success of Internet Radio and from my view, is trying to organically build a lobbying group similar to what the Internet Media Device Alliance (IMDA) is trying to do. In my opinion, it would be great for the entire industry if the IMDA and and Kurt could get together and join forces to jointly promote the space for all stakeholders!

SOCIAL: The unofficial gathering the night before at the Gordon Biersch Brewery Restaurant was surprisingly NOT super packed, as most people probably hadn't arrived in town or checked in yet, and so it was a great chance to mingle with other attendees and panelists...in an informal setting. The super talented singer/guitarist Gaby Moreno was the featured performer both days and she was incredibly original and totally awesome!! 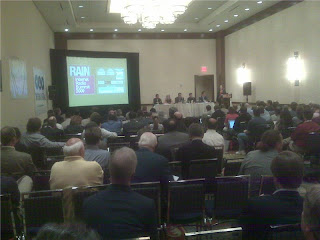 As you can see in the photo, it was pretty much standing room only at the Summit and the closing cocktail party by the pool was a blast with the live band and cool weather, etc....One final note: As well attended as it was, there definitely seemed to be a lack of PRESS and content providers (i.e. rights holders) in the room.

I highly recommend attending this event next year and want to thank Kurt, Paul and Jennifer for the wonderful opportunity to be a part of it...
If you're interested, I posted some more photos HERE...

Todd Beals
I'm a classically trained musician (with an insatiable appetite for discovering new Jazz & Reggae music) who has been actively performing since 1986. I hold music, audio and business degrees and work internationally as an executive with a diverse background in audio/video production, consumer electronics and telecommunications. Drawing on my real world education and experience, I consistently follow the evolution and intersections of entertainment, social media and technology. I'm passionate about teaching and helping others and enjoy sharing my knowledge and experiences as a guest speaker and panelist. Currently, I'm in charge of Strategic Business Development-M2M, focusing on Global Alliances for Rogers Communications. I also play trumpet/flugelhorn in The Tides Band based out of Indianapolis, IN. (The views expressed on this website/blog are mine alone and do not necessarily reflect the views of my employer.)